Shortly, we will be asking ourselves this: How can we prevent AI from learning about us? We upload so many information to the internet that the AI can pinpoint exactly who we are.

There is a huge photo sharing madness started with the ease of internet access and the widespread popularity of social networks. People either take selfies or group photos to upload them to social networks and share with their friends.

Naturally, these photographs do not vanish into the air or become forgotten. Asides from the conspiracy theories, the algorithms social networks and internet giants use, scan and analyze each photo shared. This way they can use these analyses for themselves in different services. For instance, a user can tag his friends in a picture automatically or apply the most suitable costume filters according to his features.

Russian photographer Egor Tsvetkov decided to take photos of the people he meets on the subway and try to find them on social networks. Egor carefully studied for 6 weeks and took photos of 100 people in the city of St. Petersburg. Then he analyzed them on the internet with a facial recognition software called FindFace.

The results were interesting. Egor chose VKontakte that was used in Russia as his preference of social network. He scanned this platform which has 55 million users and reached a success rate of 70 percent. That means he succeeded in finding 70 of the 100 people he took pictures of in the social networks. And this success rate is obtained only through VK. 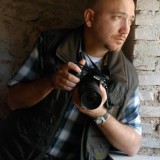